First 5K down. Who knows how many to go?

Since shortly after Milk Dud was born, I've wanted to take up running again. Several of my friends from my infant and child loss message board had successfully completed the Couch 2 5K program. I wanted to join them, but every time I'd get started with it, I wouldn't be able to get past week 3. I felt like a failure and was resentful of the fact that I didn't have time to exercise because I had a very clingy baby.

Last year, two of my friends from Baltimore Mommies started running. One of them competed in a half marathon in the fall, only 6 or 7 months after she started running and less than a year after having her second child. I was jealous. I wanted to be a runner and get into shape.

Last December, I took my first run on the treadmill with the first week of the Couch 2 5K program yet again. Two of my local runner friends said that I should find a 5K and sign up for it and that they would do it with me. Today, I completed that 5K. I ran in The Red Shoe Shuffle to benefit the Ronald McDonald House of Baltimore. I raised over $350 for the charity. The event was initially expecting only 500 runners and walkers. They ended up with 1500 and raised over $100K!

I was excited and nervous. Squirty refused to go to sleep until midnight last night and Milk Dud woke up around 4... again... That meant I did this on about 3 hours of sleep. It was nice and cool, but a little humid. I'm not really used to running in the city, so the exhaust fumes started to really irritate my lungs at around 1 mile. I don't know how city runners do it. I had to cough and walk a couple of times. My goal was to finish the race in 35 minutes or less. Yes, I was silly and set a time goal for my first race. I beat that by 2 minutes, crossing the finish line at 33 minutes almost exactly.

I would absolutely do this again. I hope to run another 5K in May through our local Striders club. Hopefully, I can better my time with some more training. Now, I have to go ice my knee. It wasn't bothering me until I sat at a restaurant for an hour and then walked around Old Ellicott City, which is rather hilly. 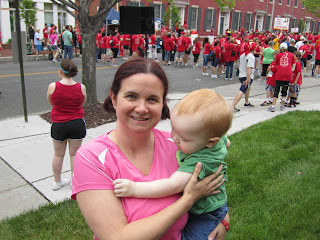 Me and Milk Dud before the race. He was obsessed with my earbuds. 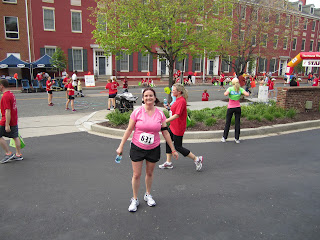