A couple of months ago I got an email from Garnier about their national tour to demonstrate their new Olia hair color. The website claims it's a different kind of hair color that is 60% natural flower oils. One of their last stops was about an hour away from where I live in Frederick, Maryland. I was looking for a new hair color. I'm kind of tired of the reddish shade I've been using, so I signed up for the free session.

They sent me a patch test a couple of weeks in advance. I received no less than 3 confirmation emails and 2 phone calls. When I arrived and checked in, they took a before picture of me. I hadn't colored my hair in a while and was overdue for a touch-up anyways. Then a consultant sat down and helped me pick a color from the strands they had on the table. The reds they had were just too red for me. I could never pull off those shades. I selected the "Darkest Violet" shade.

Next, they took me into the trailer where they were coloring, rinsing, and styling the participants. The stylist who eventually did my hair told me that they found stylists locally, but the colorists and shampoo people were under a contract with Garnier. The man who put the color on my hair. I wouldn't complain about getting my hair colored for free, but I didn't even see that the colorist left a ton of the emulsion on my face. They had a nice waiting area with iPads for us to use for the 30 minutes we had to wait. I watched other women getting their hair styled and was even more happy I didn't pick the "Darkest Auburn" shade. I didn't realize until last night what a terrible job the man who rinsed out my hair did. When I took a shower last night, I washed out almost as much hair color as I would when I first start rinsing my own hair. When I sat down in the stylist's chair, I commented "Wow! That's a lot of purple." She thought I was talking about my hair, but then realized I was talking about the huge blob of purple dye that neither my colorist or shampoo person had bothered to remove. She did her best to scrub it off, but couldn't get all of it. She did do a good job styling my hair and kept commenting on how cute my haircut was, even though I haven't had it trimmed since my childhood friend Tahlia who works at a Great Clips in Orlando cut my hair back in December. I planned to have her do it when we were down in April, but the whole "lost wallet" debacle prevented that :(

Anyways, here is a picture of my stylist and me. The color is much darker than I expected and I can't really tell that it's purple and not black. My 4.5-year-old says it looks blue. My hair is soft and shiny, which it hasn't been in a while. I would use the hair color again. It doesn't smell as badly as the ones I had been using. 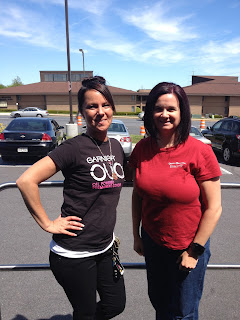 I was not compensated by Garnier USA for this post other than free hair color and style, which was available to anyone who happened upon the website before all of the appointments filled.