Why yes, he is really only 7-months old

When we were in VA this past weekend, my mom gave us some new clothes for the boys. This morning, I broke out a new outfit for Milk Dud. He needed clean clothes, I didn't want to wake his brother, and I had just done a load with the new stuff yesterday. The new outfit was 9-12 months. The shirt did not cover his gigantic tummy. It was fine for the house, but not for running out in the cool, rainy weather. My mom had given him some other stuff, too. I put him in an 18-month shirt... It's none to big... Actually, the sleeves border on being too tight. My 7-month old is wearing clothing meant for a much older child. It's scary.

Everywhere I go, people think he is significantly older than he is and wonder why he can't crawl or walk yet. First of all, he is ONLY 7-months. Second of all... How do you expect him to lift that gigantic belly off the ground? He weighs about 26lbs. I think he will outweigh his brother at the 9-month appointment.

I do love that the first question I get from some people is "You're breastfeeding, aren't you?" Why, yes, I am. I am very proud of the fact that I have made it 7-months. We have really started with the solids in the last week or so, but he is still only getting them at dinner. He is liking them better, too. He loves to feed himself peas and Cheerios.

Unfortunately, Milk Dud is not sleeping through the night. he will go down around 8pm, but wakes up at midnight and won't go back to sleep unless he is nursing. I'm tired and worn out. Squirty didn't sleep through the night until he was 10-months. I don't consider this to be a big deal, but I would like them to share a room. 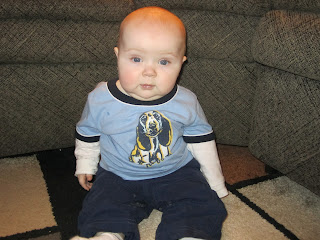 This morning, Milk Dud noticed the dog and reached out to touch him. I wish I had my camera on me at that point, but I didn't. I do have this cute picture of him in his 18-month shirt :)
Posted by AlyK at 12:28 PM