So back in January when I was still an area-group moderator for Anne Arundel County, I decided it would be fun to set up a trip to the fire station. We had it yesterday. I opened it up area-wide so if people wanted to drive down from Towson and the like, they didn't feel excluded.

We had a great turn out. I got to meet some moms that I had yet to meet and put faces to names.

Almost as soon as the paramedic took us into the room where they get their dispatches, the printer started printing out a call. Someone had fallen 20 feet through a roof. The paramedic told us we could wait for the fire truck to come back if we wanted, so we did. About 20-30 minutes later, the fire truck did come back. The poor firemen on it were on loan from a different station and weren't expecting to give a tour. That's okay. They did a decent job. All you really have to do to entertain 2-5 year olds is to turn on the siren and show them the ladders and stuff. Of course, they finished the truck and were about to show us the rest of the station, when they were called out again. I know my son had fun. I hope the other kids did, too. I might try to do another one later in the year. 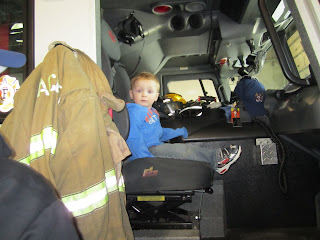