Annapolis Half Marathon and Runniversary

I did it! I completed my first half marathon on December 1, 2012. This was coincidentally also my 1st "Runniversary." A year ago, I completed my first Couch to 5K workout and continued the program to completion. In the past year, I've run two 5Ks, Ragnar DC, the Marine Corps 10K, and the Annapolis Half Marathon. The only one that didn't get my nerves was the 10K.

So... Race report for my first half... I trained so hard for Ragnar and totally slacked off after it was done. I skipped 2 of my long training runs and I hurt my IT band. I felt really really unprepared. Two of my Ragnar teammates signed up to run with me. I was glad they did. Seriously, without Chris, I would have been walking at mile 4. I dunno why I thought that Annapolis would be flat.

First part of the race was around the Navy Stadium. The first water stop had a place for you to drop any extra clothes. They were going to bring them back to the start and donate whatever wasn't claimed. Then we ran through downtown Annapolis, past the Naval Academy, St. John's College and over the Navy Memorial Bridge. I swallowed my gum at the second water stop. Oops! It was so foggy that I couldn't really enjoy the sights. My cousin Jen had planned to take a picture of the Memorial. I wasn't with her at that point, but you couldn't even see it, so I doubt she was able to get one. I got a Gu at the turn-around and I really should have had another one.

I lost Chris at about 9 miles. I was sad to lose her and wasn't sure how I was going to make it back over the bridge without walking. I didn't. My calves started spasming. Right at that point, someone says hello to me. I turn around and it's my friend Meghan in her Sparkle Skirt. Running next to her got me through the next almost 2 miles until my calves spasmed again. After the last water stop, this woman who had been with me the entire time complained about the fog. Running with her got me through the last mile. My time was 2:19:10. Since my goal was to finish and aside from that I was hoping for under 2:45:00, I'm thrilled with my time. I have a shiny new medal for my bling wall, a nice running jacket from Born Fit, and a running cap (something I actually needed!)

The highlights of the race were a woman wearing a shirt that said "Will stop for morning sickness" and a couple dressed as a bride and groom with their bridesmaids and groomsmen crossing the finish line together.

I'm glad I did it. I have a decent PR for a first race. On to more racing! 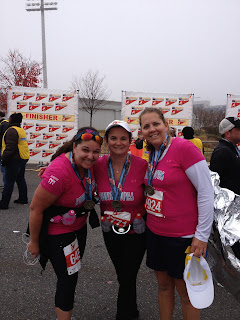 Email ThisBlogThis!Share to TwitterShare to FacebookShare to Pinterest
Labels: Annapolis Half Marathon, Half marathon training, half marathons, running