The end of being "Trapped Under a Milk Dud"

Don't worry. My blog isn't going anywhere... He is still a Milk Dud... just not a "Milk Dud." Last Monday, he asked to nurse and I put him off to walk the dog. He didn't ask again until Wednesday. I put him off then because I had just run 6 miles and needed a shower. I put him off a couple of more days because I was busy. Today, he didn't even ask. Milk Dud turns 2 on Wednesday and I guess I should be celebrating the end of an era. He nursed 10 days shy of 2 years. I am feeling guilty about not continuing. His brother only made it 17 months. My husband was weird about the fact that Milk Dud would say "I want to nurse" and then specify the side he wanted. He is my last baby, so I will never have this kind of relationship again.

I am proud of myself. Only a small percentage of mothers continue to nurse their children after a year, most aren't even nursing at 6 months (http://www.cdc.gov/breastfeeding/data/NIS_data/index.htm). Milk Dud only got 10cc of formula in the hospital when his blood sugar dropped and I was too exhausted to fight the annoying nurse. My oldest never received any formula that wasn't a breast milk fortifier, even though he was in the NICU. 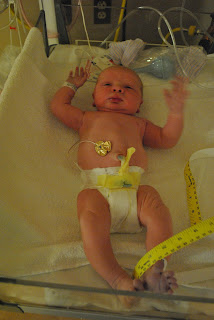 A few minutes after birth 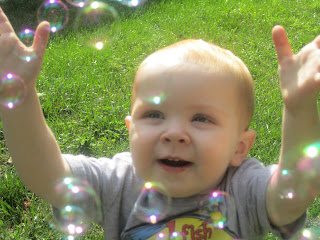 A couple of weeks ago

Instead of being sad that it's over, I should be glad that I was able to do it at all considering the odds were stacked against me as a parent of a preemie who had only seen breastfeeding once in her adult life.
Posted by AlyK at 11:16 AM